June 1 and 2 of 2016 were two wonderful and rewarding days I spent. Quest Medical Academy – the brainchild of Dr Sushant Shinde had organized an event – Quest Unplugged.

This is an annual event (this was the second) where  small groups of students chose topics, did some research on them and then presented the topics, based mainly on one core article that they chose, but also quoted others.

The topics ranged from broad ones like Nutrition in the ICU, to very specific ones like Asthma – COPD overlap syndrome! Overall eight topics were presented on each day. Majority were equivalent of journal clubs. However there were also some that were different – one being about women doctors and issues they face, another about the next step in healthcare – where Ms. Sana Merchant presented about a whole range of medical innovations like Nanopills, Insulin mouth sprays, Smart Clothes and more. At the end of the day two students also presented projects they would like to work on. The finale was about “Passion” and Rhishikesh Deshpande, an MBBS student from LTMMC (Sion Hospital) gave a fitting description of the term, by sharing with us how his passion for the mountains has made him a trekker and mountaineer, even with his tough academic curriculum! 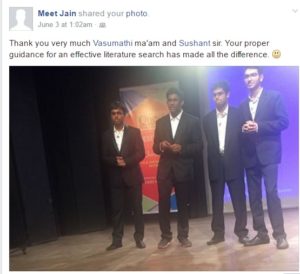 The judges were three young doctors who did a great job of praising students, giving them very constructive feedback as well as suggestions, and overall interacted with them later too.

What was I doing in this event? I was invited as a special guest. Actually, when I heard Dr Sushant describing last year’s Quest Unplugged, I wanted to attend this year’s. And I was delighted with the invitation. What did I love about it?

It is not easy to describe all presentations and presenters here, so I will just say this – they all did very well! Many of them despite being first time presenters did not make the oft found mistakes of
a) too much stuff on their slides,
b) reading out from slides
c) overshooting time… and more.

In fact many were creative and acted out parts! Hats off to all presenters and hats off to Dr Sushant Shinde – a young doctor making a difference! And of course to the three judges. I am waiting for Quest Unplugged 2017!