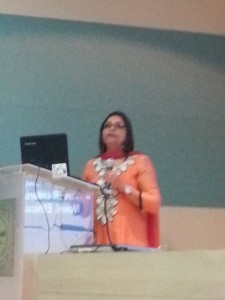 For those who do not live in Goa, the place  is almost always associated with holidays. And those who go on a holiday to Goa would be most reluctant to leave the beaches and anything else they are enjoying.  My trip to Goa was for the wedding of the daughter of my childhood friend – someone who I shared almost every waking moment with, during high school and college days. Now getting away from her and that too on a Goa beach venue would not have been easy, but thank goodness, it was for something I had long wanted to do – a lecture at Goa Medical College. Every time I visited Goa, I would longingly look at the college as I passed from the airport to the holiday venue, and this time, thanks to Dr. Lalita Fernandes, who I came to know through both – the FAIMER and the MECOR programs, a lecture was arranged!   On the 31st of October, I reached the college at 2.15 PM, and went to the Library Auditorium, where I had to deliver the lecture. Dr. Lalita was there with three of her PG students. I was in for a lovely surprise! Dr Lalita Fernandes had planned a ‘scenario based introduction’ to my lecture. She told me that her students would play the roles of  –  fresh PG student, a guide and a senior resident – and convey the problems a student faced while searching the literature, through a role play skit.  I could see that Dr Lalita had used her FAIMER training to make a difference. We rehearsed and planned this set up quickly and at 3.15 PM, the event began.

After a brief introduction and the role play, which was great,  I was invited to deliver the lecture, the teachings of which, would solve the student’s problems. The audience were waiting to see how I would solve the problem. I was honoured to note that the auditorium, was not only full, but there were about 10 people standing too, during the session. Which meant that about a 100 people attended the session. More importantly a lot of them participated, by answering questions that I put up every now and then. While this happens pretty often in our lectures, this time Dr Lalita made a difference here too. She used the method in the MECOR programs to encourage participation – by rewarding the first person with the right answer, with a sticker. Now, this is a small reward, but there is a child in each one of us that delights in public recognition. And people get encouraged to speak out. More participation thus encourages better learning, because if someone gave a wrong answer, they also learned why it was wrong. The lecture understandably went a little beyond the normal one hour, and I was happy when I was told “it is not often that a full auditorium of people stays till the end, especially if the lecture extends a bit longer, but today everyone did”. My sincere thanks to all faculty and PGs who stayed and made the event delightful. And thank you for promising to invite us to conduct workshops. The QMed team will be very happy to do some for you. Dr. Lalita Fernandes and colleagues – thank you for your extra efforts with the role play and the rewards. I have to personally add a special thanks to my husband P. Sriganesh for driving me to GMC from our holiday spot and back (about one hour each way), in the midst of a wonderful holiday. He is also a trustee of QMed and never tires of supporting QMed and me, in our quest to make a difference! Vasumathi Sriganesh