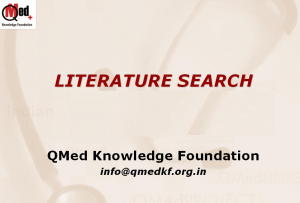 The Bhaktivedanta Hospital located in Mira Road Thane District (beyond Mumbai’s suburbs) is a hospital that had its origins in 1986, when a group of doctors who had just qualified in their respective specialties started working together, doing health camps. They later built a small clinic, which over the years grew to become a large superspecialty hospital! Do check out their website to learn more

The Nursing Department of the hospital organized a two day Research Methodology workshop (July 10 and 11) for Nursing faculty / professionals of their own institution as well as those from other institutions in Mumbai. There were 23 participants. As part of this event which had several topics, Vasumathi Sriganesh was invited to give a lecture on literature searching, followed by conducting a group activity based on the lecture. After the lecture participants were divided into five groups. Each group was asked to

a) Plan a simple research topic

There was an interesting buzz of activity. When groups presented, we figured that being the first time they were exposed to such an activity, there was some confusion! Some groups gave several strategies based on examples taught. But after they were told that they needed to create one core strategy, they understood and had a clearer idea of what they would do, if they searched PubMed.

Overall the program was an enjoyable one, but the reality is that searching and reference management skills need dire attention in the curriculum!